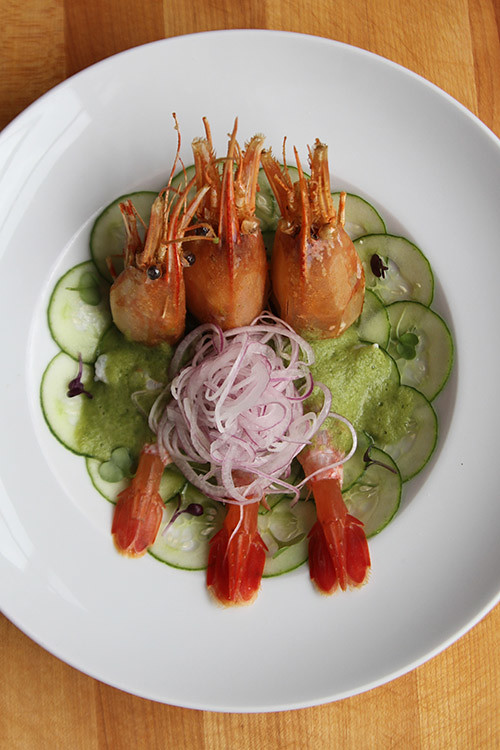 We’re big fans of seafood—raw, barely cooked, grilled, fried or smoked—we can’t seem to get enough of it. Of the methods we just listed, barely cooked is one method we’re particularly fond of especially when you have access to fresh quality seafood. What do we mean by barely cooked? We suppose it could mean cooking salmon mi cuit or a quick sear albacore tuna, but here we’re thinking more along the lines of cooking with natural acids (lime, lemon, pineapple, orange etc.) such as in ceviches and the lessor known aguachile.  Anyone who has watched Top Chef or spent significant amount of time south of border will most likely have seen ceviches on mexican and latin menus. Aguachile is essentially a type of ceviche that takes it one step further by combining the acid (in this case lime) with cucumber and green pepper (such as jalapeño or serano chili) to make a green watery sauce, hence the name.  Like ceviche the time it spends cooking can be a matter of personal taste, but traditionally its served immediately after tossing in the aguachile so essentially it’s as close to raw as sashimi. 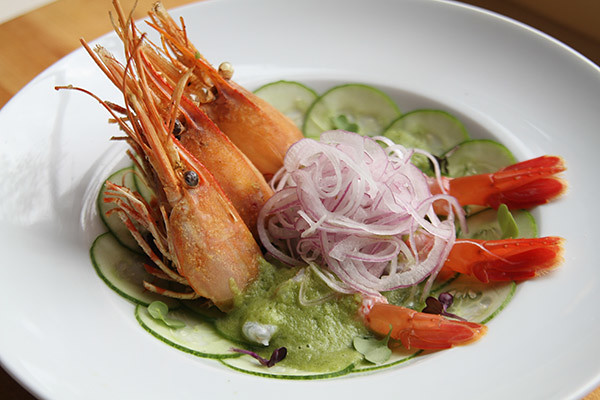 For this preparation, we love to splurge on live spot prawns. We’re lucky the Asian markets in Los Angeles have tanks of live seafood and when in season, these beautiful prawns are literally jumping out of tank, begging to be bathed into aguachile (at least that’s what we like to convince ourselves). If you’re using fish, it’s best to use sashimi quality fish. One of our favorite versions and inspiration for our version is from a Coni’s Seafood, a favorite Mexican Sinaloan seafood spot in Los Angeles.

We simply blend lime juice, water, chili, cucumber, and cilantro in a blender until completely liquefied.  In the photos above we didn’t strain it, but visually it might be better to strain the pulp and use only the liquid. Season the aguachile with sea salt to taste and then toss onto with shrimp and enjoy with some tortillas, avocados and diced cucumbers.  We took one step further by separating the prawn head and gave it a light coating of flour and fried till crispsy, because who doesn’t love munching on crispy prawn heads? 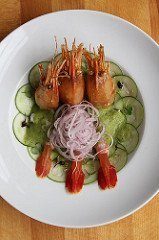