Durian. Just the mere mention of the name elicits extremes of love and craving as well as horror and disgust. Anthony Bourdain, a lover of durian, describes his experience as thus: “Its taste can only be described as…indescribable, something you will either love or despise. …Your breath will smell as if you’d been French-kissing your dead grandmother.” We fall squarely in the love durian camp and it so happened that our brother in law told us he was dreaming of a durian cake for his birthday. At the same time we were reading the Pie A Day on Evan Kleiman’s blog Good Food and the wheels in our heads started churning and our concept was born. Durian in a form of an ice cream is much less offensive (at least to some) and with the hot whether it would be the perfect filling for a frozen pie.

We didn’t stop to think that for one, we don’t own an ice cream maker and two, we have never made a pie, meringue, tart or anything close to resembling a pie before. The closest thing to is our pork filled banh pate chaud, a meat pie with puff pastry. But we took it as a challenge and a concept that we tossed around in our heads, praying that it would work. After doing some research we decided on using Jaime Oliver’s basic recipe for a semifreddo (Italian for “half cold”), which is like a ice cream, but has more of texture of a frozen mousse and can be made without an ice cream maker. For the crust, we wanted something that would hold up to a good freeze so decided on a basic short bread cookie crust.  We made this entirely with our brand new Viking Pro Stand Mixer which we won in California Olive Ranch contest.

The durian has a high amount of natural fats so we added some key lime to the durian to add some tartness and cut down some of the richness. The guava coulis is another tart yet sweet flavor that we though would work well with durian. This recipe yields 2 small 9 inch pies–you don’t want to reduce it–trust us, it’s worth it! If after reading this you still have no desire to try durian, you can substitute with any fruit puree. An even quicker way to enjoy this is just by pouring the mixture into a mode such as a baking pan lined with plastic wrap and a layer of nuts and forego the crust.  Freeze and then either scoop out or flip out the semifreddo and slice small sections. The end result? A smooth semifreddo with just enough hints of durian to peak everyone’s interest and nice texture with the crumbly shortbread crust.  No ice cream maker? No problem! The semifreddo method is quick and simple. Our brother in law had a very, very, happy birthday and had his durian cravings fulfilled. 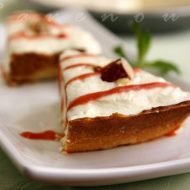 This recipe does require a little bit of planning. Ideally you should make this one day before you plan on serving.
Start with the crust by processing the flour, sugar, salt, and slowly adding the butter until it forms into a clumpy dough. In a greased pie pan, make a very thin layer of crust, about 1/8 inch thick. Freeze for at least 1/2 hr to prevent shrinkage and during this time preheat oven too 400 degrees. Remove chilled crust and add a pie weight (of layer of parchment paper filled with beans/rice etc to prevent puffiness) and bake about 15 minutes. Carefully remove the weight and liberally score the crust with a fork and continue to bake until golden brown. Remove and set aside to cool.
Fresh or frozen durian will work. Two good size pieces of durian flesh will yield approximately 1/2 a cup. Puree durian flesh with sugar and key lime until very smooth and set aside.
In large mixing bowl, whisk egg yolks with 1/4 cup sugar until a thickened smooth pale yellow color. Fold in the durian puree and mix well. Set this aside in the fridge.

In a separate bowl, mix the whipping cream until it form soft peaks. Do not over whip as it will curdle. Gently fold this into the yolk and durian mixture until it complete incorporates. Set this aside in the fridge.

Finally, whip the egg whites with a pinch of salt until you get stiff peaks. Gently fold this into the durian mixture until it is completely incorporates.

Now carefully add the mixture to the cooled pie crust and cover with plastic wrap. Freeze for about 4 hours or overnight.

To make the guava coulis, reduce the guava puree, sugar, and key lime by 1/3 under low heat. Store in the fridge until ready to use.

About 1 hour before serving, transfer pie into fridge to become "semifreddo." Sprinkle any toppings you like..chopped pistachios or almonds works well. Top with guava coulis (use a squeeze bottle or spoon on) and enjoy!