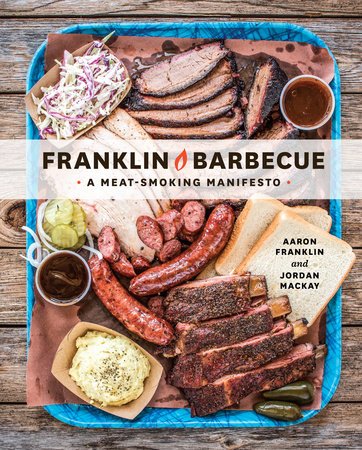 If you’re any sort of bbq fan, then you’ve probably heard of Franklin BBQ in Austin, Texas. Only 6 yrs old, it’s already been hailed as the best BBQ in America and has spawn legions of fans that happily wait hours for a taste of its legendary meat coming from its smokers. We’ve never had the fortune of tasting Franklin BBQ yet we’ve heard so much about it from friends and have seen his PBS series on Youtube and now have the pleasure of reading his cookbook, Franklin BBQ: A Meat Smoking Manifesto, we feel that we really know the guy. At least, his bbq philosophy.  Unlike most BBQ cookbooks that’s packed with recipes, A Meat Smoking Manifesto just contains 11 recipes from the restaurant and promises no secret sauce or rub that will make your bbq just like Franklin. It does however give you insight what makes great bbq and how you can achieve it—and that’s through lots of hard work and attention to details.  His story of an ordinary self taught BBQ pit cook becoming someone regarded as a master of his craft is not told to gloat, but to show to all that if an ordinary guy can do it, you can too….with a lot of hard work and years of practice, practice, and more practice.

The knowledge that he gained through countless trial and error about BBQ smokers, wood, and fire are recounted in its own dedicated chapters.  So again, it’s not a list of recipes that you’re not gonna make. He imparts his knowledge and gives you guidelines on the most important aspects of smoking meats, choosing meats, carving meats and so on. The recipes almost seem like after thought, but that’s what makes this book so enjoyable. His recipes can be found on his Youtube videos and countless other internet sources. It’s his years of knowledge—information that can only be gleaned from countless cooks, staring at the fire and smoke— distilled into a single volume sets this book apart from all the rest.

But don’t just take our word for it. We actually put his tips to the test and went out to smoke a brisket using his book as a guide. So we got a prime grade packer brisket from Costco and trimmed it according to his directions (for first timers, even his detailed directions with photos can be daunting and hard to follow so we recommend a few of these videos for reference 1  and reference 2 ) and seasoned it with 1:1 ratio of kosher salt and black pepper with just water as the slather. Using our Pit Barrel Cooker with  about 5 chunks of oak  buried in the charcoal basket, we fired up the Pit Barrel Cooker in the usual way.  We kept the temperature as close to 275 as possible  and cooked it on the grate fat side up and monitored the meat and bbq temperature with a Maverick Wireless BBQ thermometer.  One of the best tips for cooking brisket that Franklin gives is to cook through the “stall.”  For anyone who has smoked a brisket, the stall is when the internal temperature of the meat lingers around 150 for hours.  Many recipes call for wrapping your brisket in foil and adding liquid when it hits the stall. This works, but the results are subpar, steamed brisket with a mushy bark. Franklin encourages you to push through the stall (hence the slightly higher temp of 275 instead of the usual 225) and only wrap when the brisket has good bark formation. His wrap of choice is butcher paper (we used parchment) because unlike foil, it is permeable and allows more smoke to enter and to continued bark development.

So when our brisket hit the stall at 150, instead of wrapping we pushed it through by cracking the lid slightly and increasing the temperature of the pit barrel cooker to about 300.  Surely but slowly, the brisket pushed through the stall with temps reaching 180 in about 2 hours.  The bark was pretty well developed and deep dark mahogany color at this point so we wrapped tightly with parchment and continued the cook until the temperature probe hit 203.  We pulled the brisket and wrapped a towel around it and placed it in a cooler to rest. This was actually the hardest part, but he recommends at least an hour rest (or preferably when the internal temperature is 140) before slicing.  Suffice it to say, everything regarding this brisket was great. The bark formation and of course the flavor was fantastic. The texture was moist and meat was super tender.  We served it with a side of corn and bean salsa and some smoked corn on the cobb.

It was by far, one of the best things we made on our smoker and bbq afficionados across America will instantly improve their bbq and brisket prowess simply by reading this book no matter if they have only smoked 1 brisket before (like us) or hundreds. One day we’ll have the fortune of waiting in the Franklin BBQ line and sampling his bbq, but in the meantime we’ll just have to settle for making it at home.

We received this book from Blogging for Books for this review, however opinions are entirely our own.