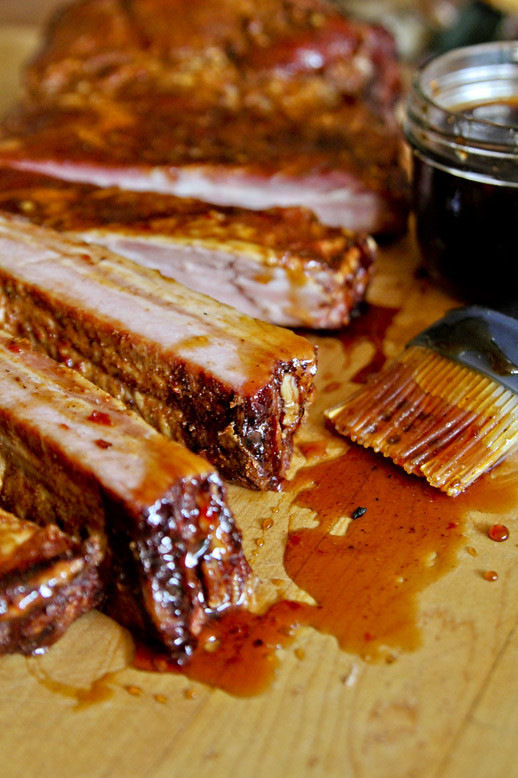 Let’s put this out here front and center. We’re gluttons for good smoked bbq (we’ve had a bbq caterer smoke bbq for 3 parties!) but have always been too intimidated to make it at home—until now. Yes, we’ve spent hours making complex soups such as bun bo hue and other seemingly difficult Vietnamese dishes, but just the thought of researching and buying an expensive smoker and laboring over the temperature for hours upon hours was too daunting a task, especially with a 8 month old.  Several months ago while researching bacon recipes, we stumbled upon the Pit Barrel Smoker from this review that claimed it “produces delicious results with an ease of use that approaches the set it and forget it” digitally controlled pellet smokers at a much more affordable price.  Reading a few more testimonials all confirmed the same thing and at under $300, our interest was peaked.   We were ready to pull the trigger and get our smoke on.   But the company had a 4 week backlog right before the holidays  (which is no longer the case –now free 2 day shipping comes standard.)   So we contacted them and was so fortunate that they were willing to let us try it out! 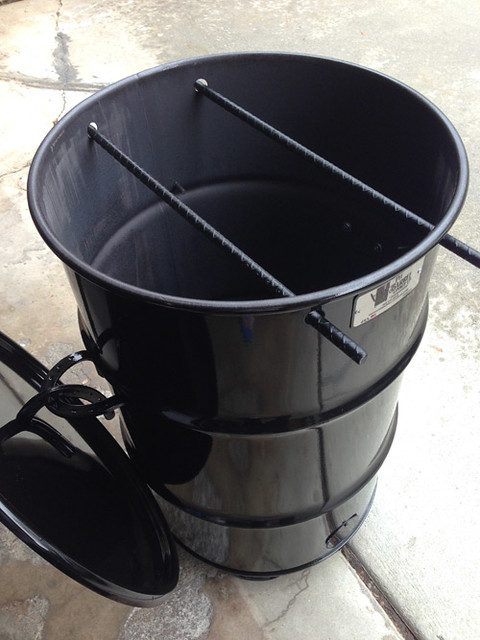 The Pit Barrel Cooker is a vertical drum style smoker with only 6 parts and comes fully assembled—porcelained coated, its made out of heavy gauge metal and built like a tank but light enough for one person to carry. Started by a former Iraq war veteran Noah Glanville, it’s a family business based out of Colorado and made completely in the USA.

Within 15 minutes of opening  the box, we began our smoking our first bbq chickens armed with no other equipment than an instant read thermometer and the two rubs provided in the Pit Barrel Cooker, The All Purpose Rub and the Beef and Game Rub.   For someone that’s never smoked anything before, start up was fast and dead simple.   There’s only 1 air vent to possibly adjust (depending on your elevation) otherwise, we just poured the charcoal (Kingsford Original is the recommended charcoal) in the basket, lit it, and yes, forgot about it (at least for 2 hrs)!  Chickens takes about 2.5 -3 hrs to cook according to Noah so after we hung the chickens we took the baby for a leisure stroll around the park and a quick trip to the grocery store. We highly recommend watching the helpful start up videos on the Pit Barrel Smoker website as well as the recipes video to use a starting point for your BBQ. 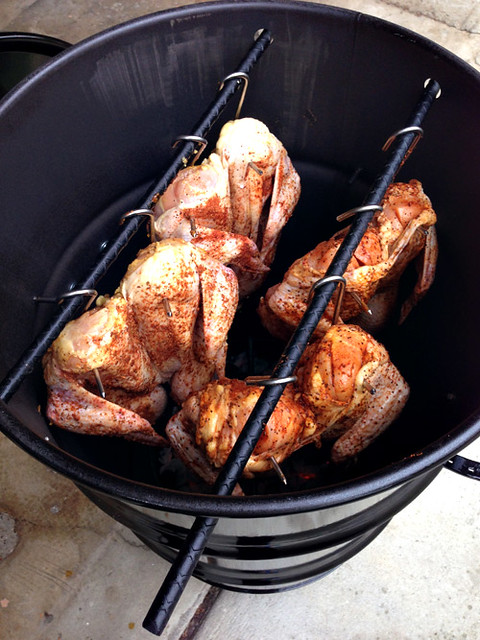 So how did our chickens turn out? Absolutely fabulous–it was the most tender and juicy chicken with the most wonderful smoky aroma we’ve ever had.  And all we did was spatchcocked  and rubbed them with the Pit Barrel Cooker All-Purpose rub 20 minutes before hanging them in the smoker.  We had our parents in town from Michigan and they were blown away at how simple to delicious it was.  She was a shy but delicious one! 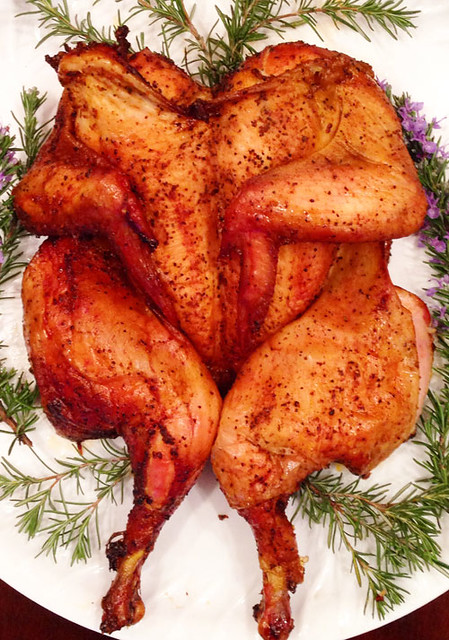 The very next day, we tackled an entire whole 12 lb packer brisket. How about that for some guts?  We trimmed the brisket and rubbed it with the Pit Barrel Cooker Beef and Game Rub and hung the meat at 9 am.  We fed the baby then took her for a stroll and ran a quick errand and came back 3.5 hrs later at 12:30 and the instant read thermometer read 160 degrees.   Then we used the Texas Crutch method and took the brisket off and wrapped it in foil with 1/2 cup of chicken broth and placed it back on the smoker, but instead of hanging, we set it on the grate.  We check it an hour later and the temperature was 205 degrees and pulled it here: 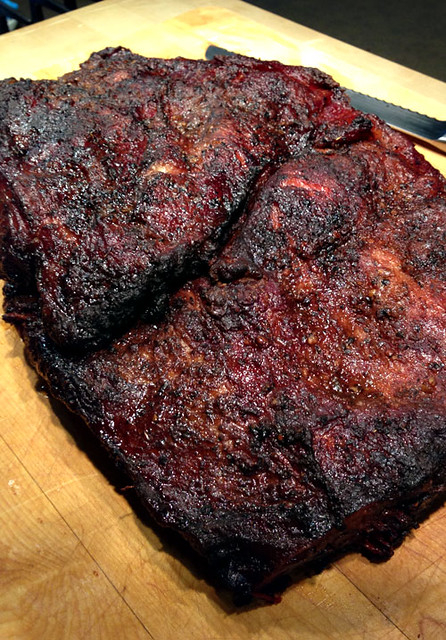 We then wrapped it in foil and placed it in foil pan in an insulated cooler to catch any leaking juices and then added a few spare towels for further insulation and let it rest until dinner time, about 2 hrs later.  This was the result and let you be the judge: 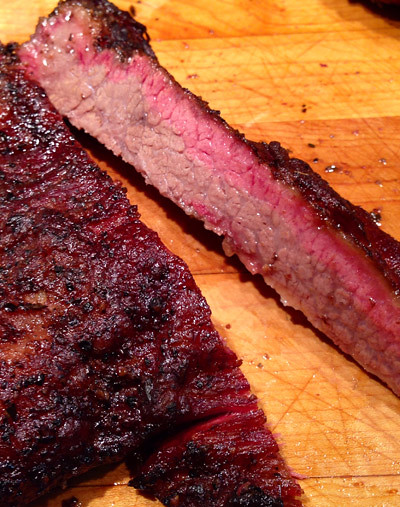 Can you believe it? Our very first full brisket, beautifully done in about 8 hrs (including resting time) with us checking in on it only twice!  For a first time we were really proud of ourselves. It had a gorgeous dark mahogany bark and a beautiful smoke ring. The meat was melt in your mouth tender and juicy. The flat we simply sliced and ate it with coleslaw for dinner, but the point, we did something extra special.   We sliced it off and cubed it then we heated some of our favorite tortillas and make an avocado sauce to go with it and it was some of the most luscious beefy taco’s we’ve ever had. 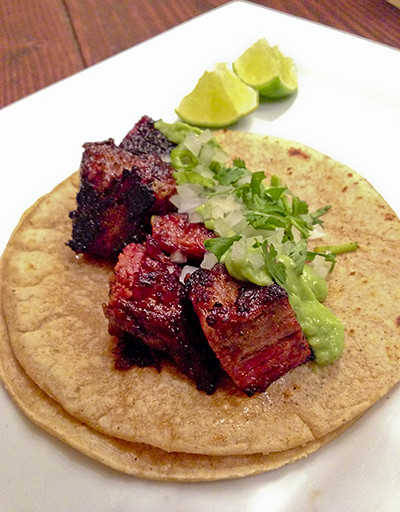 The following weekend our parents and their friends were in town so we wanted to treat them to some BBQ. But our parent’s aren’t too familiar with BBQ so we decided to make BBQ with an Asian twist. 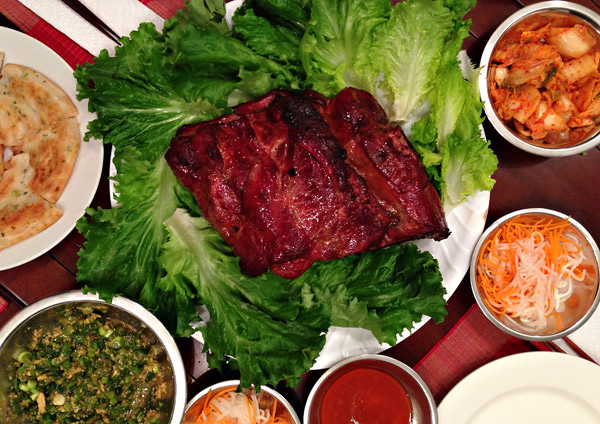 So how did we use the Pit Barrel Cooker to make an Asian inspired meal for 10? Smoked Pork Butt Bo Ssam!  f you’re not familiar with Korean cuisine, bo ssam means wrapping in lettuce. It’s a traditional Korean meal of steamed pork wrapped in variety of condiments and lettuce.   We decided that smoking a pork butt would be a heck of a lot better than steaming, so we did just that.  But instead of smoking to 200 degrees that pulled pork recipes calls for, we stopped short, and smoked it to 165 degrees where it’s still tender and juicy but won’t shred apart when slicing. 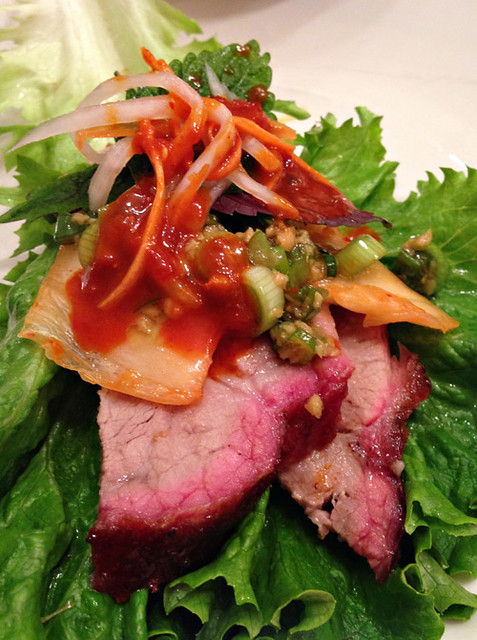 Smoked pork is much better than steamed pork any day.  Look at that pink  smoke ring! It was a huge hit and our guests just raved about how tender, juicy, and flavorful the smoked pork butt was.

A few weeks later, we had guests over from Vietnam and again, we thought what better way to treat them to a meal of American BBQ?  We got a few beef short ribs and a small boned in rib roast. We seasoned them both simply with the provided Pit Barrel Cooker rubs and threw them in the smoker. This time however, we used the grate instead of hanging the meat.  Here the results speak for themselves: 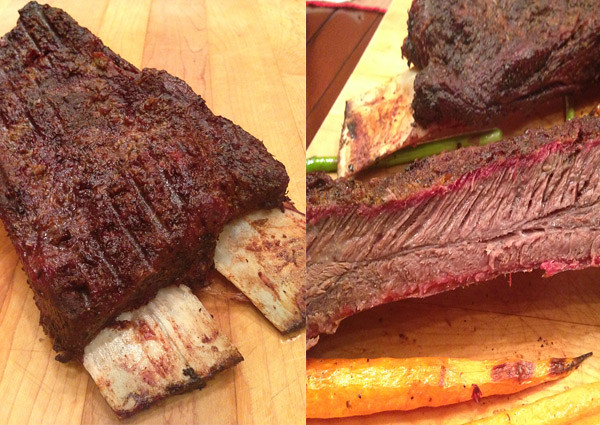 We call these dinosaur ribs. Thick, beefy,  and tender. Absolutely make any caveman (or women) swoon.  And how about the rib roast? 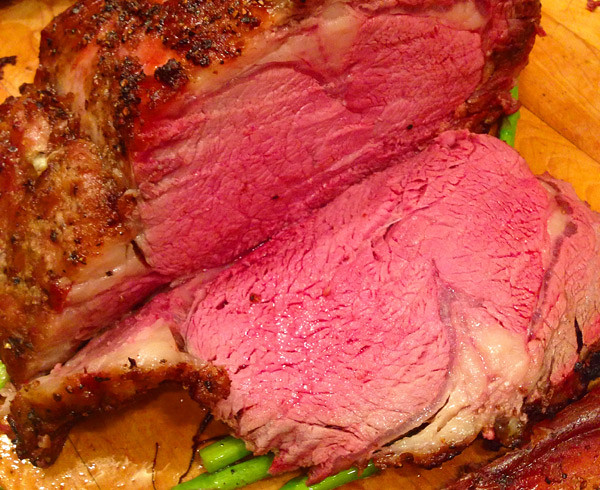 This is absolutely the easiest and best rib roast we’ve ever done. It took only about 2.5 hrs for the rib roast to reach 120 degrees. We pulled it and wrapped it in foil while the beef ribs took another 1/2 hour longer. When the guests were ready we unwrapped the rib roast and carved up the most perfectly medium rare and juicy slices of rib roast we’ve ever had. Look at how evenly pink from edge to edge the roast is. Now that is a sign of low and slow!

Here’s a quick video tour of some of the things we’ve smoked. As you can see, we really put the Pit Barrel Smoker to the test in just a short month and the results are mouthwatering. We’re just so impressed at how simple it is to use, regardless of the protein we’re cooking.  Whether it’s chicken, pork ribs, beef ribs, pork butt or brisket, the only variable that you need to adjust is cooking time.  The dry rubs provided are great and can be used for a variety of proteins.   The Pit Barrel Smoker has made our regular outdoor grill obsolete.

We’re going to posting some of these BBQ recipes and methods in subsequent posts so keep an eye out for them.  In the meantime, if you’re in the market for a smoker or even if you’re not, you want to check out the Pit Barrel Cooker.  We can’t recommend it enough and look forward to cooking with it for years to come.