This is a special guest post told by my dad, Tung.  He’s been hanging out with us for the past month helping around the garden and loves to tell stories and repeats them almost endlessly.  We asked if he had any stories  to share on the blog and if there was any food memories and this is what he told us:

Every April, I can’t help but reminisce about the indelible memories I call “Black April,”  April 30, 1975. It signified the end of the prolonged Vietnam war ending years of sacrifice and bloodshed of both Vietnamese and Americans.   When the war ended, my life and the life my family knew changed forever.  Because I was a high school teach and a former soldier in the South Vietnamese Army, I was placed in re-education camps at Tay Ninh, Phu Quoc, and Long Khanh and survived 3 years of forced hard labor.  Many of my friends did not survive but I was more fortunate and 3 years was relatively short compared with some who were imprisoned 10 or 20 years.  I did everything possible to survive, even resorting to eating anything I could forage or catch such as grasshoppers, lizards, and even snake. Serving in the South Vietnamese Army 1968.

Meanwhile, my wife along with our oldest daughter and Hong had fend for themselves, waiting for me to come home. Finally in October 1978, I was released but I realized that Vietnam was no longer the Vietnam I knew and that my children would not have a future there.  I decided to escape Vietnam with my family at all cost.  Even though I knew escaping could lead to our family’s death or separation, I was willing to “tìm caí sống trong caí chết,” to find freedom at all cost, dead or alive.

We were not the only family as hundreds of thousands of families faced a similar decision. Despite the risks of being lost at sea, drowning, or pirate attacks, the cost of freedom was high. Our family could only afford to send 3 people, despite having 6 in our family (my third daughter was born after I was released and my wife was 5 months pregnant.)  My wife and I were willing to split up family with the hopes of re-uniting together again in the future.  How long we’ll be apart or by what means we would be united, we didn’t know, but we were willing to take that risk. 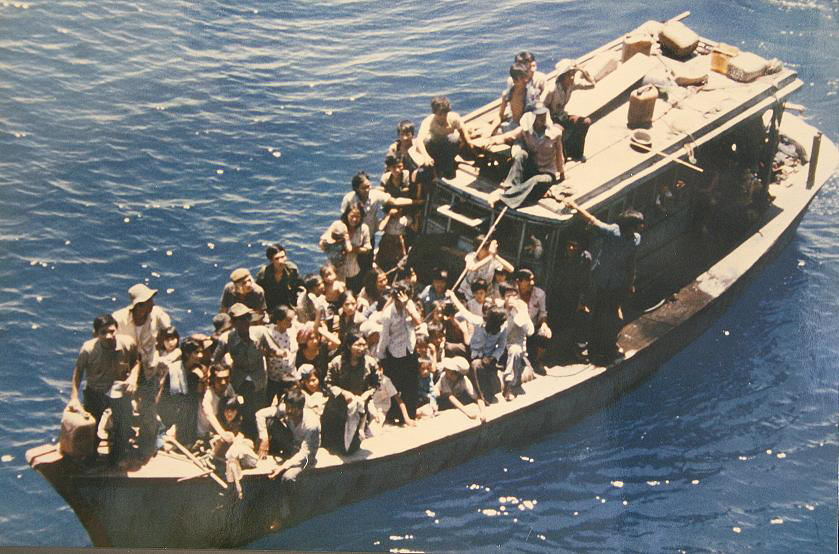 A similar 30 ft fishing to the one I was on, holding an astounding 120 people.

Dressed as peasants and with only the shoes and cloths on our back, I took my oldest children Tam and Hong on a days journey west to Rach Giá, a fishing village on the western coast of Vietnam.  We stayed in a hut by the river for 2 days and on the third night,  march 16th 1980, under the cover of darkness, we  huddled in a small canoe and they pulled a fishing net over our bodies to hide us.   The canoe took us 1 mile to our rendez-vous point, but it seemed like an eternity as we feared for our lives at being caught.  We reached a larger fishing boat in the open waters of in the Gulf of Thailand and despite being only a 30 ft fishing boat, we were among 120 other families crammed together in every nook and cranny of the rickety boat.  It didn’t matter that were packed like sardines, elbow to elbow, we were all silent, scared to death, praying not to get caught and to reach our destination alive.  For three days and two nights we didn’t budge from our spot on the boat and didn’t have a single bite to eat or drink. We were truly at God’s mercy.  My oldest daughter, Tam cried of thirst, but no one had any water to give except drops of rain water I could catch in my palms.  At dusk on the third night, we arrived  in a small fishing village of Klong Yai, at the border of Thailand and Cambodia.  Strangers in a strange land, no one disturbed us and we just slept on the  boat until the following morning. The next day, the Thai police arrived and took everyone up the coast about 80 miles to Laem Sing Refugee Camp along the eastern boarder of Thailand, which became our new home. Laem Sing Refugee Camp was a camp only by name. There were no housing or barracks, it was a barren peninsula where thousands of Vietnamese stayed for refuge from 1976 to 1981. Essentially a shanty town built of make shift shelters of tin scraps and wood,  life there was extremely difficult.  We were lucky as we found shelter underneath a crematorium, away from the elements.    There was a food ration every day of rice and fish and water, but aside from that everyone  had to fend for themselves.  Sometimes there might be small pieces of chicken or a single egg to share among the three of us. Image of a typical refugee camp courtesy of refugeecamps.net

We were grateful for the Thai people and at least we had food and shelter but most importantly we were alive and safe.  Back in Vietnam, my wife only knew that we made it safely to Thailand by telegram message I sent when we arrived.   My initial days and weeks at the camp was just focused on taking care of my children and surviving in the camp. I didn’t have time to worry about the future and when or how our family will be united again.   The goal was to make it to America and then sponsor my wife, third daughter, and our unborn child in the future. Five, ten, or fifteen years in the future, I had no idea but that was my goal.

There were at least 5,000 refugees at the camp by my count and more were coming each week. Each time new refugees came, there was much excitement and people would run to greet them in the hopes of finding a familiar face,  a family member or friend who might have escaped safely. I had a young cousin who would always go and occasionally tease me, saying my wife had arrived. But I knew he was teasing and never participated in this ritual because I knew we did not have the means for her to escape. About one month later, on a lazy afternoon of April 30th, he  came running and screaming, “Chị Phú đến! Chị Phú đến!”  This time it was different. He was screaming emphatically and caught in the emotion and excitement  I ran to to the entrance of the camp, scanning the crowd of about 100 new refugees and saw her. My pregnant wife and youngest daughter, Ngoc. I ran to embrace them. We were a family again. Unbeknownst to me, my mother in law also had secured enough loans to send my 5 month pregnant wife and youngest daughter about a month after I left, on 4/15/80. She went from Can Tho on the eastern border of Vietnam and arrived safely in Sattahip Naval base where she stayed until she was also transferred to Laem Sing Refugee camp.

That is why I will always remember April 30th. It was the day my country fell, but it was also the day my family was reunited. I will always be grateful to God and everyone that brought us safely from Vietnam and eventually to America.  We spent another 6 months at Laem Sing, during which my youngest daughter, Freedom was born before being sponsored to America.  However life during the last 6 months could not have been better.  We were all together and was able to get more food and my wife began to cook meals for the family again.  One of the first family meals together was a simple dish she cooked called miến gà, a  chicken glass noodle soup.  Even though I ate this dish hundreds of times in the past, this time with our family re-united and free, I felt immensely blessed and grateful.  Thinking what could have been and the remote odds of seeing my family together so soon,  I ate  this simple dish with such happiness. It was the most satisfying and unforgettable meal I’ve ever experienced. So when my dad retold this story to us this past week, 33 years later, Kim was able to recreated this dish for my dad to celebrate the anniversary of April 30th. For more information about the Vietnamese Boat People experience,  check out Boat People: Personal Stories From the Vietnamese Exodus 1975-1996  by Carina Hoang and and the UC Irvine Vietnamese American Oral History Project and in DVD or Netflix, Journey from the Fall. 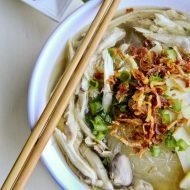 Char the onion and ginger over flame of your stove or broiler. In large stock pot, make the chicken stock by adding charred onion and ginger, chicken, gizzards, and hearts to the water and bringing to boil. Reduce to simmer until chicken is tender and cooked, roughly 30-40 minutes. Check by piercing the chicken at the thickest point with knife and see if any blood oozes out.

Remove the chicken and wrap in plastic wrap and allow to cool. Season the stock to your personal taste with salt/fish sauce, and pinch of sugar. Add the shiitake or bamboo shoots at this point if you like.

Soak the bean thread noodles in hot water for about 15 minutes. Shred the chicken by hand, leaving drumsticks and wings intact. Prepare each bowl with bean thread noodles and shredded chicken and bring the broth back to boil. Ladle broth into bowls and top generously with chopped scallions, fried shallots and ground black pepper. Serve immediately with side of rau răm. 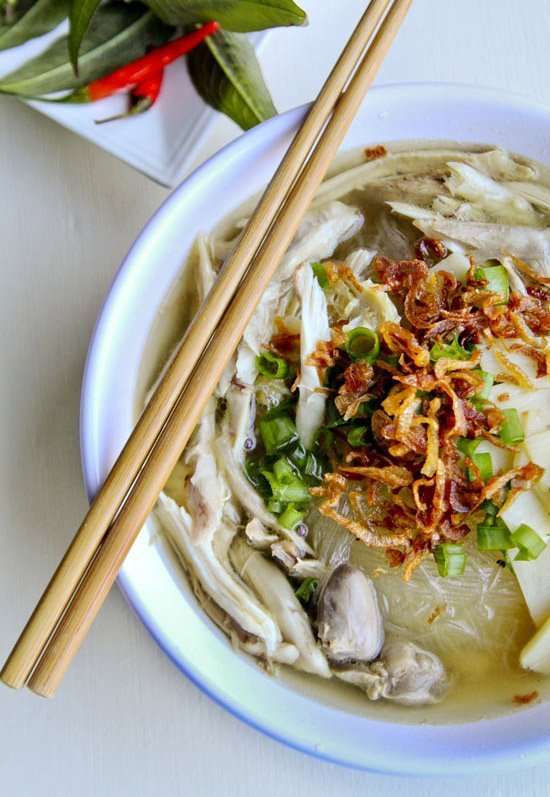