We previously wrote about the meaning of Tet trung thu festival and the ubiquitous and delicious mooncakes but never thought of making them ourselves.  We thought it was too complicated to make at home, but fortunately we were proven wrong.  Many moons ago, when Cathy of Gastronomy blog came back from Vietnam with authentic wooden modes for banh trung thu, we got together with friends for an afternoon of baking moon cakes in the middle of spring  lead by our fearless leader, Diep of Good Girl Dinette.  It didn’t matter if Tet trung thu always falls in September/October of each year, we all wanted to learn.  Flour was tossed, eggs beaten and moon cakes we knocked out, literally.  There’s always a pent up craving for moon cakes each year  as they’re only made during the weeks leading up to the  midautumn moon festival.  Mooncake stands will pop up at street corners of Vietnam to satisfy the masses.  Typically baked, this wheat dough pastry resemble a hockey puck, albiet one that’s much more pleasing to the mouth. They  are often filled with lotus seed or bean paste with or without various nuts, dried candied fruits (mứt), salty yolks, and other savories such as sausage, chicken or pork. Baking mooncakes at home isn’t terribly hard, you just need a bit of preparation and special mooncake modes which is often the hardest part to find. Traditional modes are carved from a single block of wood and we’ve only seen them in Vietnam and other parts of Asia. Plastic modes however can occasionally be found in Asian markets, particularly in large Chinatowns so keep an eye out for them the next time you go. It’s a great activity to have family and friends over, catching up on lost times and pounding out mooncakes. Plus, it’s tons of fun trying to see who makes the best impressions using the mode as it does take a combination of confidence and skill to strike the mode the right spots to knock out the perfect mooncake. Here’s a quick video on how it’s done:

Indeed, baking mooncakes is cherished family tradition every autumn with Diep and her family, not unlike a Vietnamese version of Thanksgiving. If baked mooncakes aren’t your thing, either due to taste of gluten allergy, try rice flour based  ice or snow skin  mooncakes with it’s mochi like chew. If you’re up to the challenge, try Diep’s recipe below and have a great Tet trung thu on September 30th! 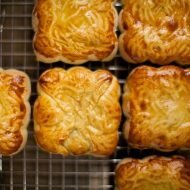 1. roast sweet potatoes until they are tender and can be easily pierced
with knife.
2. peel and discard skins and mash potatoes.
3. mix together butter, sugar, cinnamon, nutmeg, ginger, and salt. add to
mashed sweet potatoes. let cool.

1. combine brown sugar and water in a pot and cook over medium heat
until sugar dissolves. cool and transfer to standing mixer with whisk
attachment.
2. add oil and ginger, and egg yolks.
3. slowly add flour. At some point, the dough will be too stiff for the whisk
attachment. replace with a paddle attachment and continue to add the
rest of the flour.
4. transfer dough to a worktable, for rolling.

1. form filling into balls. the size will depend on the size of your
mooncake mold.
2. take a bit of dough and roll out until it forms a sheet about 1/8 inch
thick.
3. Enrobe the filling with the dough. pinch the seams to seal. Place on
silpat-lined baking sheets.

1. pre-heat oven to 350.
2. spray mooncakes with some water, then apply an eggwash for a glossy
sheen afterwards
3. bake for 15 mins.
4. spray mooncakes again. Turn down oven to 300 and bake until crust is
golden.