Ca nuong da don with hanh mo (scallion oil) was a grand surprise for our guests at our Foodbuzz 24 x 24 Spring Roll Party. Talk about a show stopper, a whole golden brown crispy catfish will surely grab everyone’s attention. We love the crispy skin and the moist meat inside marinated in a sea of ginger, shallots, garlic, and lemongrass. Top it off with a fragant hanh mo (scallion oil) and roasted peanuts you have an amazing presentation at the table. For a couple of the Thanksgivings, we even had whole roasted catfish instead of turkey.

The hardest part of this dish is cleaning the fish.  Fresh, live catfish is best because it has a fatty layer of skin that can stand up high temperature roasting.  If you don’t have access to live catfish, then previous frozen catfish will also work. Other fatty and meaty fishes such as salmon would also work great but you’ll have to adjust the cooking times.  The catfish has a black outer layer of skin that needs to be cleaned off for best results–if you leave it on, you get a black roasted fish and the beautiful golden color just won’t show. Plus it’s a little more fishy smelling with the black skin on. We’re fortunate that most of the markets in Little Saigon does this free of charge–just tell them to make the skin white and clean and butterfly the belly.  But if you don’t have the luxury, you can attempt to clean it at home–we’ve never done it ourselves but this is what the fish monger at the market does:  dip the catfish in boiling water for about 1 minute. Using a brillo pad, scrub off the black layer of the catfish.  When doing this, it’s helpful to have some good gloves to grip the fish.  Also, cut the fins and slit the belly and de gut it and butterfly it.  Yes, not terribly fun tasks but end result is worth it–at least, we hope to convince you it is. The crispy skin is what our guests fight over. So to achieve this, you need to do three things–make vertical incisions about an inch or two apart just barely through the skin along the both sides of the fish–this relieves the tension and allows fat to render and crisps the skin. Second, the skin needs to be dry, hence we use a dry rub and dry the skin at least overnight. Third, use you convection setting in the oven and make sure the fish is as flat and even as possible on the sheet pan. Use balls of foil to prop up any low lying parts for even browning.  Catfish has a thick fatty protective skin—it can stand a lot of heat. We essentially cook the fish until desired color-we’ve found it really hard to over cook and dry out catfish.

The hardest part of making Vietnamese roasted catfish is prepping the fish, but once that’s done, it’s just a matter of marinading and following our simple tricks to make the skin crispy and meat moist. It’s not often we guarantee anything, but we guarantee you’ll impress your friends and family with ca nuong hanh mo and the end result will be quite similar to ours….

In case we don’t post again this week we want to wish all the fathers and father figures a Happy Father’s day–especially to our dads–our role models and heroes. 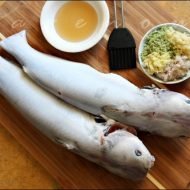 Have your fish monger clean and scrub the skin and butterfly the fish. Dry the skin of the fish for at least one night. When roasting, make sure the fish is as evenly laid out as possible, use balls of foil to even out any low lying areas.

Combine all the dry rub ingredients in the marinade and mix well. Pat dry your cleaned catfish and make the shallow slits along both sides and apply dry rub all over and allow to marinade in the fridge overnight or up to 2 days

When ready to roast, preheat oven to 475 convection. During this time, get your peanuts ready to roast in small sheet tray until golden brown. Remove and coarsely crush. In small saucepan, heat up the oil under low-medium heat and when hot, add the scallions, ginger, shallots, and pinch of salt and turn off heat. You don't want to cook it or fry it, just wilted and have the flavors infuse in the oil and set aside.

Line a large sheet pan with foil--when you put the fish on the roasting pan, make sure it's spread apart and as even as possible. This helps with even browning. The roast time will vary depending how big your fish is--but for 3 lb fish takes about 30-45 minutes. Baste every 10 min with butter and oil mixture. We cook until desired color/crispyness. During the last few minutes, switch to high broil to finish browning the skin.

Remove from oven and top the fish with the generous amounts of scallion oil and roasted peanuts. The traditional way of enjoying this dish is in a rice paper roll-- serve it family style with vermicelli and fresh veggies and have guests make their own rolls. For guests that don't want to roll, they can have this dish as a noodle bowl instead.