Cha lua or gio lua (Vietnamese ham/sausage) is another common item on the traditional Tet menu. As we mention, Tet is a time for families to come together and celebrate the new year with a fresh start. But it’s also a time to remember and honor the past. During Tet, cha lua is frequently used as an offering to relatives that have passed and placed before the ancestral alter in each home. And of course since it’s a filling for the traditional new year snack banh day (sticky rice cakes),  you can’t have a shortage of cha lua around the house during Tet.

The rest of the year however, cha lua is something that’s so ubiquitous in Vietnamese cuisine, that we often take it for granted.  Cha lua goes well with anything from banh mi, banh day (sticky rice cakes), banh cuon (steamed rice rolls), xoi gac (red sticky rice), and noodle soups such as bun thang, bun moc (pork and mushroom noodle soup), and bun bo hue.  Or it can simply be fried (cha chien) and dipped in a chili fish sauce and eaten with rice.

Hang with us for a second now–here’s where the terminology can be tricky.   Before the cha lua/gio lua is cooked, it’s in a form of a pork paste called gio song (song in this context means uncooked)–a lean cut of pork is grounded/pounded into a paste and seasoned.  This gio song is what you find in the frozen section of your Asian grocer and is used to make our bun moc (pork and mushroom noodle soup). From this gio song base you can also make cha que (cinnamon pork pate).

The gio song is then traditionally wrapped in banana leaves and then boiled or steamed, and then you have your cha lua/gio lua.  This is my mom’s cha lua recipe and she insists that the French Alsa baking powder is the only one that works well so look for that in your Asian Market.  My mom buys it by the case load since she always makes her own. While it’s prettier and you get a slightly more fragrant cha lua with banana leaf, wrapping the cha lua in plastic wrap is much faster and easier (make sure you use microwave safe plastic wrap).  We made both sausage and round shaped cha lua.  Remember that the cha lua will rise and expand a bit when cooked. Steam for about 20-25 minutes (will vary depending on size). Pan fry some cha lua until golden brown for some great cha chien.  So tasty, easy, and inexpensive to make at home. Cha lua  keeps well in the freezer for months so there’s no reason why you have to pay $4-5 per roll of cha lua in the market.  Enjoy some cha lua for Tet this year! 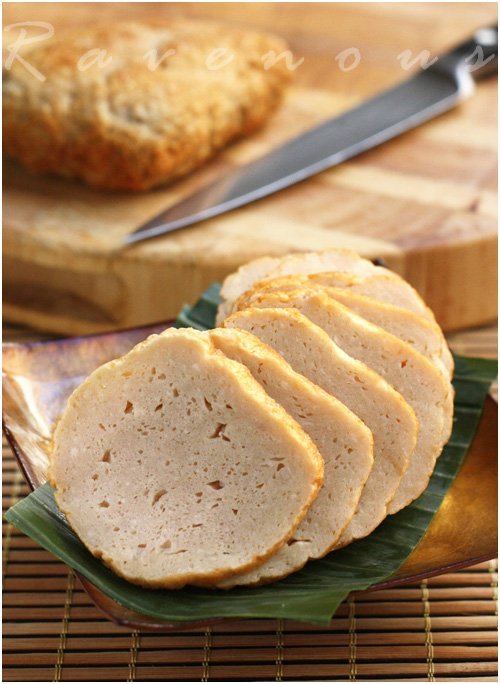 You can substitute with other lean meats such as chicken. Fried cha lua is called cha chien.