During the winter crab season we took full advantage, making sup mang cua (asparagus and crab soup) using fresh dungeness crabs. But we also had some king crab meat given to us by The Food Addicts and so we made some bun rieu (crab noodle soup). This soup is very hearty and great during the winter months as it combines some of our favorite ingredients of tomatoes, tofu, and crab.

Traditionally this soup is made with whole blue crabs which are then pounded in a large mortar/pestle. The crab meat is separated from the crushed body. The body of the crushed crab is then put into a fine mesh cloth or sieve and water is then strained through, forming the base of the broth. Do I make my bun rieu this way? Heck no!! It’s too time consuming! 🙂 But when Hong was growing up, he would help his mom make bun rieu this way. The result of is a much more intense crab flavored broth.  Almost everyone I know uses a can of minced crab in spices as a substitute for this labor intensive process.

So if Hong wants his bun rieu to taste like his mom, he better do the extra work. 🙂 For me, a good and easy alternative is to use the minced crab in a can and add that to my all purpose pork broth that I use to make many of my soups. But if I’m really pressed for time, canned chicken broth will also do.

Unlike pho or bun bo hue where there are slices of meat added, the key protein component to this soup is the crab meat mixture, rieu, made of the minced crab (or alternatively dried shrimp), ground, pork and egg.  It’s essentially a Vietnamese version of crab cakes but in a soup! Some cooks like crab mixture more formed, almost like a meatball or patty. While we like it more airy and loose, like pillowy mounds of deliciousness. You can adjust how you like it by the ratio of egg to meat in the recipe below—the more airy and soft, the more egg and less ground pork. Another key ingredient in this mixture is  shrimp paste for that extra umami. Other variations of this soup includes oc/periwinkle called bun oc.

Here’s a quick video on how to make this simple yet delicious soup! Serve bun rieu with plenty of fresh herbs and veggies. Common accompaniments include:

To make the split rau muong, there’s a very very high tech process…in the form of a $2 utensil you see above. It’s composed of a thin rod and at the end, a sharp turbine like cutting edge. Pluck the leaves of the rau muong and insert the long metal rod into the stem opening. With one hand hold the device at the top and with the other, grab the stem and with a quick fluid motion, push the stem through the blade opening. These special devices are often sold at the Asian markets and are so handy in making perfectly split rau moung stems which gives bun rieu a refreshing crunch. With crab season and the cold weather we’ve been having lately, bun rieu is a great soup to enjoy. But honestly, it’s so delicious and not labor intensive that we enjoy eating this soup year round and think you will too. 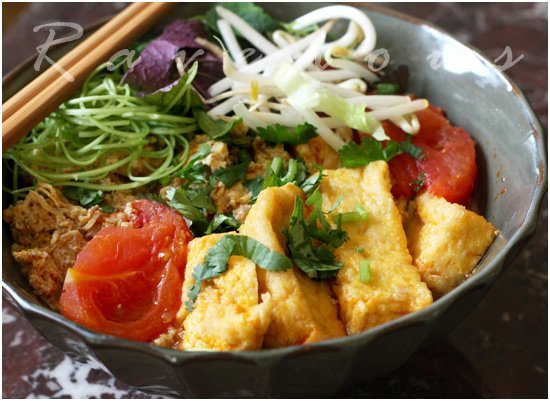 The crab paste mix is soft and pillowy but stays together. If you like it more loose, add an additional egg or decrease the ground pork in half. Annatto seed oil (without the scallions) can be made in larger quantities and stored in fridge for months. If using prepared annatto seed oil, simply heat and stir in scallions.